Anthropogenic climate change will likely result in shifts in tree species ranges and abundances. The species composition of the southern boreal biome (much of northern USA and southern Canada) is expected to be especially sensitive to climate warming since there is a relatively sharp boundary between many temperate species to the south and boreal species to the north. The potential of climate warming to alter tree species composition at the southern boreal-temperate forest ecotone is being assessed in a number of experiments, including research in experimentally warmed plots at two forested sites in northern Minnesota as part of a project called B4WARMED (Boreal Forest Warming at an Ecotone in Danger).

B4WARMED: Boreal Forest Warming at an Ecotone in Danger.

The global climate system is being altered by anthropogenic emissions of CO2 and other greenhouse gases, increasing temperatures worldwide, particularly at northern latitudes. The pace of global climate change, including warming, is expected to accelerate in the coming century, as atmospheric concentrations of greenhouse gases continue to increase. In Minnesota, our climate has migrated 70 miles north in the past 50 years, and may migrate 125-250 miles further north in the next 50 years.

Northern Minnesota is a focal point of potential climate warming impacts because it sits at the transition – or ecotone- between the boreal and temperate forest zones. Most tree species in these forests (like aspen, spruce, and birch) are common in the boreal forests to our north in Canada or in the temperate maple-oak forests common to Wisconsin and places south and east. Increasing oak-maple dominance in our forest communities under a warmer future would represent a shift from our boreal heritage. However, both the northern and temperate tree species may perform poorly under warmer conditions. If so, neither our current forest trees nor their potential replacements may be well suited to our future climate. This experiment will enable us to assess the potential for climate change to alter future forest composition by experimentally warming forest plots (with infrared lamps and soil heating cables). We are documenting the effects on establishment, growth, and survival of seedlings of ten important tree species near their warmer (boreal species: Pinus banksiana, Picea glauca, Abies balsamea, Populus tremuloides, Betula papyrifera) or colder (temperate species: Pinus strobus, Quercus macrocarpa, Quercus rubra, Acer rubrum, Acer saccharum) range limits in northern Minnesota, in order to understand how germination, growth and survival at the establishment stage are influenced by direct and indirect climate effects. 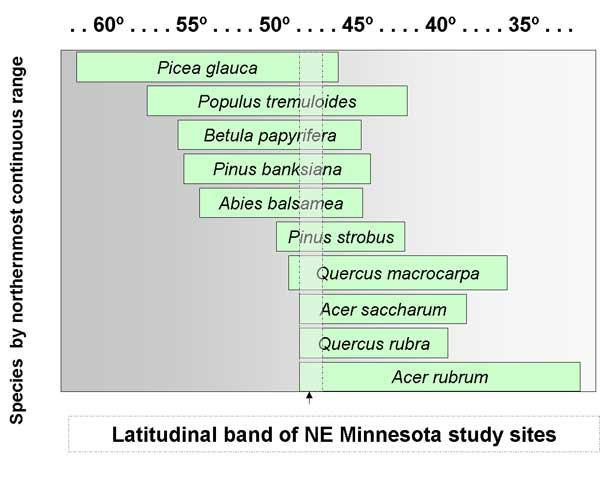 Research sites are located at the Cloquet Forestry Center, near Cloquet, MN and at the Hubachek Wilderness Research Center near Ely, MN.

To date, we have achieved temperature elevation near our targets. Warmed season means across 2009-2012 field seasons were +1.9C and +3.5C for soil temperature at 10 cm depth. Aboveground means were +1.6C and +3.3C from infrared radiometer measurements of canopy surface temperature. 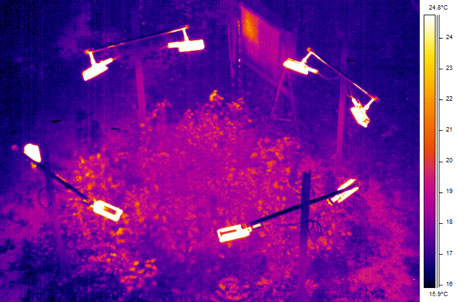 In 2012, we installed and deployed event-based rain exclosures on 18 plots in the open canopy replicates of the warming experiment where we could safely and reliably remove rainfall without complications from tree damage to shelters and stem flow from large trees. Mean rainfall exclusion from June until September was approximately 42-45% at both sites. 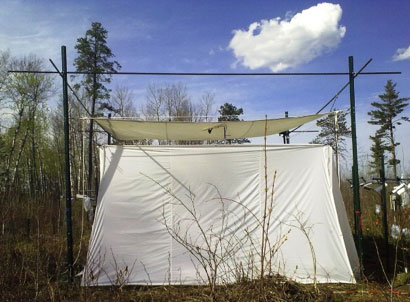 Growth and survival patterns across the 2008-2012 have been consistent with hypotheses. Boreal species, especially conifers, tended to show negative responses to warming for survival and growth of juveniles whether from the planted seeding or planted seed cohorts (of different ages) or both. Balsam fir and white spruce tended to have the most negative responses. Temperate broadleave species (oak and maples) by contrast tended to have neutral or positive growth and survival responses. Such responses are consistent with in situ photosynthesis responses. Additionally, rising temperatures can affect plant performance indirectly by increasing nutrient availability in soil via accelerating microbial activities. Both shoot and root biomass were significantly increased in soils from the warmed soils; however, significant differences were mainly found between ambient and +3.4 °C temperature treatments. This is a clear indication that warming treatment modified soil processes in significant ways.